Most Christians today agree that the Bible teaches a literal hell, although there is some disagreement on the endurance of one’s soul in hell. Catholicism teaches that one can be rescued out of hell or purgatory through the prayers of the living. The Mormon faith also diverges with mainstream Protestants on the meaning and nature of hell. Save for the two examples above, most Christians believe that non-believers and the wicked will be condemned to this place of torment forever and ever. There is no chance of parole nor can you be pardoned. This will be your final and eternal resting place. Period.

So, the question we have is this: is eternal damnation a just punishment and does eternal damnation confound our meaning of justice?
With regard to punishment, the human concept of justice is closely measured with the magnitude of the offense. A premeditated murderous act would earn an individual a much harsher sentence than failing to buckle up. Not so with hell. The slightest infraction, no matter how small, will earn you one way ticket to eternal suffering. Somehow, though, suffering for eternity seems inconceivable and incredibly harsh no matter your crime. Consider the following:

A young Jewish boy caught up in the Nazi war machine is tortured, starved, and forced to work unimaginable toil. Then, he is gassed to death. As a young lad it’s quite possible that he had heard of Jesus, but he was most likely brought up in the Jewish tradition and faith. This most unfortunate and horrific event undoubtedly included several thousand young Jewish boys and girls during WWII. That is, they all died a horrific death at or near the “age of accountability” without knowing Christ.

Now consider their killers. Hermann Goering, Joseph Goebbels and, of course, Adolph Hitler were directly responsible for the deaths of millions of Jews. These men plotted unthinkable acts of horror and carried them out on the young, old and sick with a merciless and callous sense of satisfaction. These men, too, died without knowing Christ. Jump ahead to their judgment before God.
God: what say you?

Jewish Boy: I’m sorry, but I didn’t know your son, Jesus. I was torn from my family when I was just 10, forced into labor by the Nazis, and then tortured and killed. I, and thousands like me, stand before you today and ask for mercy.

Nazis: Yes, we are guilty of murder. We plotted evil and carried it out without any reservation. But we also ask for mercy. We understand we must pay for our sins, but an eternity spent in hell seems harsh even for us. We beg for mercy.

God to the Nazis: I’m sorry – I never knew you. You are condemned to hell forever and ever.

God to the Jewish Boy: I’m sorry – I never knew you. You are also condemned to an eternity in hell where you will suffer unimaginable pain forever and ever.
-----------------------------
If this what the Bible teaches, does it not render our notion of justice senseless?

We could also discuss the justice of hell for people who were unlucky enough to die after the life of Christ but before they had any knowledge of Him. Untold thousands most certainly lived and died without knowing Christ, both in the literal and spiritual sense. The gospels weren’t written for years after Christ’s life and information about him could be delivered only through word-of-mouth. Yet, the Bible is clear about the fate of unbelievers: eternity in hell.

So, how do we reconcile the foreverness of hell and justice? Do we simply accept it and move on, or do we hope that exceptions apply. It’s easy (in today’s modern and connected world) to lump all unbelievers into a nice, neat category and condemn them to hell. However, a part of us can’t help but decry this all-or-none proposition as unbelievably harsh and cruel when applied to individuals.
Posted by Brad D at 5:03 PM No comments:

Brad's clan has officially moved back to the states. I took a promotion and we have moved from Seoul, South Korea to El Paso, TX. Now, you might be telling yourself that moving from fantastic Seoul to barren west Texas seems less like a promotion and more like a downgrade. I won't lie: we did give up a few things by leaving Korea (great food, good friends, etc) but it's good to be home. And so far, El Paso has not disappointed. The wife is happy; the kids can walk to their schools; and I have my own office at work. We get over 300 days of sunshine - yes, it gets hot in the summertime, but I'll take blue sky and warm temps over clouds and rain any day. So, thanks for keeping the lights on, and I look forward to some very interesting posts.

A Perennial Argument in Financial Economics


This post addresses the presence of “bubbles” in asset prices. The first task is to define a “bubble,” partially so we know what we’re discussing, and partly so I can stop using scare quotes. The intrinsic value of an asset is the present value of the future cash flows, discounted at the appropriate rate, called the capitalization rate. The capitalization rate is the required return on the asset less the expected growth rate of the cash flows themselves. For equities, the cash flow is the sum of: (1) dividends, (2) capital gains including those arising from buybacks. VNote that a lot of the work in finance is about the correct model for the required return. For example, the Capital Asset Pricing Model (CAPM) and the Fama-French three factor model. I’m not going to go over those specific models in this post, but I will discuss the importance of the required return shortly.

When discussing the stock market as a whole, we can arguably use a simplified valuation equation, known as the Gordon Growth model. The Gordon model assumes a constant growth rate of the cash flows. This simplification allows us to see the three factors that affect asset values: expected future cash flows, required return, and expected growth rate. These factors are the fundamentals of the asset. Now, in financial economics, we think of a “bubble” as a fourth factor, one that causes the market price to deviate from the intrinsic value. The equation would thus be:

So is any deviation from intrinsic value is a bubble? That would be true in a world of perfect information and foresight. But recall we estimate everything, and have imperfect knowledge and information, so the market value can substantially deviate from the intrinsic value without there being a bubble. This fact makes a bubble extremely difficult to detect except (maybe) in hindsight. Essentially the best we can do is to say something like “market values are very difficult to justify based on what we know about stock market fundamentals and what’s likely to happen in the future.” But caution doesn’t put your name in the papers.


My opinion is that most disagreement comes from the growth rate. I remember during the asset price run-up in the late 1990s (the so-called tech bubble) so many talking heads on the financial television shows were spouting “new economy” to justify extraordinary valuations of stocks. That’s basically an argument about growth rates. Another source of disagreement, although less so, is the required return. The problem with required return for the stock market as a whole is that it is often backed out of the valuation equation (2) using current asset values. Thus it amounts to the same bit of information but viewed in a different way.


So now we have the definition of a bubble: market prices that are not justified by the underlying fundamentals. We also now realize how difficult a definition this is to apply. That’s two reasons we see so much fighting about bubbles. And, even if we could positively identify a bubble to everyone’s satisfaction, we have no ability to time the bursting of the bubble.


I recall a paper by Scheinkman, in the early 2000s, in which he showed that a market participant that knew, for a fact, the market was currently in a bubble would still have incentive to trade because of the ‘bigger sucker’ factor. So merely recognizing the bubble exists is not enough to say it should pop. It’s also a question of when others decide there’s a bubble. By the way, there can also be negative asset price bubbles; it’s just that most bubble talk happens when asset prices appear to be abnormally high.


In the interests of responsible journalism, what I’d like to see happen is replacement of the use of “bubble” with “asset prices seem abnormally high/low.” While that might seem mealy-mouthed to some, it’s actually the only truly justifiable statement. And, if you truly believe asset prices are abnormally high, keep your mouth shut and trade: buy puts for example.


To close this post, I'll draw your attention to the trend lines drawn in the graph of Real NYSE prices below. The trend line with the highest slope would be what we'd get if we had the same stock returns during the tech boom. It's off the chart at the top. The trend line with the lowest slope is simply connecting the low point prior to the tech boom and (almost) the low point reached when the real estate crash bottomed out. The third (moderate) trend line is tracing the slope from prior to the tech boom, and assuming that the returns during that period are a reasonable guide. If that moderate trend line is correct, then a large portion of the stock boom since the mid-1990s has been unjustifiably high. But the question is, where's the bubble? It depends on where the trend line "should" be. 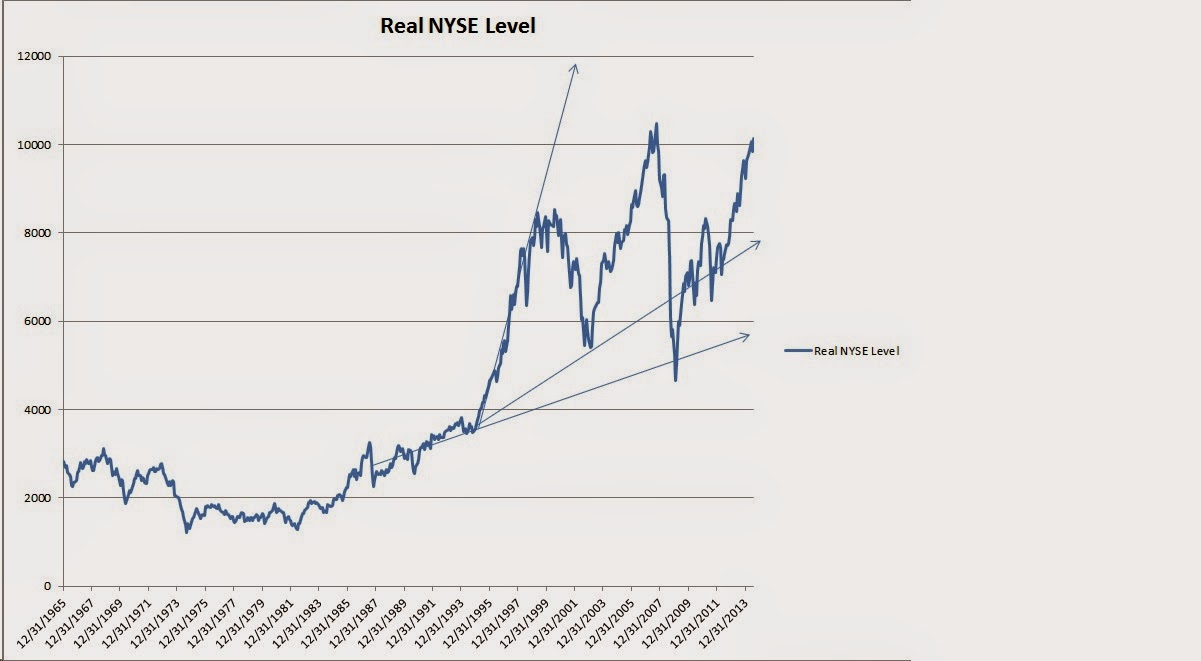 Obamacare Just Made Americans Richer Without Anyone Noticing


That’s what the headline in the Huffington Post said.


If all we need to become richer is legislation from Washington D.C., why hasn’t this been done before and sooner? If mere laws can create wealth, our riches are limited only by our imagination.

The sad and undeniable truth is that wealth is not created by legislation. Washington can only force the transfer of previously-created wealth from group A to group B, while skimming a little off the top for itself. Even my grade school children are wise to this fact.


I  read today where the government of the United States is preparing to enact sanctions against Moscow for invading Crimea. Isn’t this just a little hypocritical? Did Russia, or any country for that matter, slap the United States with sanctions when we invaded Iraq ten years ago?

After 9/11, not only did we falsely claim that Saddam Hussein was preparing to unleash a torrent of WMDs against the United States, but we deployed our finest salesmen to convince a skeptical world that it was true. Now, we scorn another world power for doing what we did.
Maybe Putin is convinced Crimea has WMDs. His only miscalculation may have been failing to convince everyone else before invading.
Posted by Brad D at 1:44 AM 1 comment: